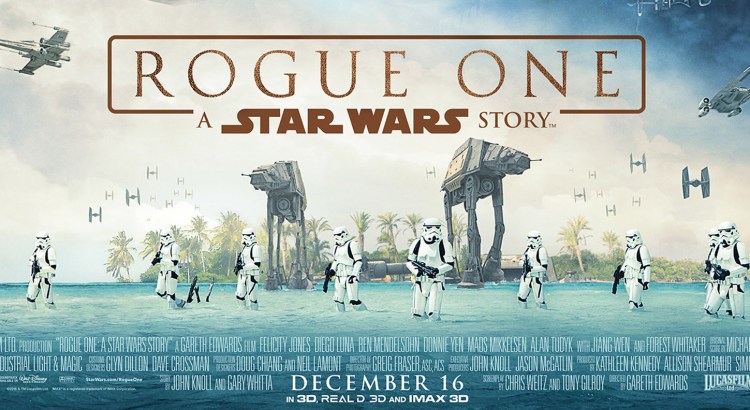 Have you ever watched a film or tv show, listened to an album, or read a book that you admired more than enjoyed? That is how I feel about “Rogue One: A Star Wars Story,” a movie set around a week before the original Star Wars form 1977. Unlike a lot of blockbuster movies that come out these days I am still processing and absorbing it, while others I liked more have nearly vanished from memory. So why is this movie staying with me? Warning: There will be spoilers.

I think this is the most thematically complex Star Wars movie. It’s also the most serious one. Despite all the carnage and destruction the Empire created in the previous movies this is the first one where they seemed realistic rather than cartoonish. The Imperial part of “Rogue One” focuses on bureaucratic infighting which is both darkly funny and horrifying in this day and age. The ultimate resolution to this infighting is the definition of overkill. There are also brief vignettes of stormtroopers being normal people, which drives home how mundane evil can be. The body language of a stormtrooper guarding a labour camp might be one of my favourite moments of the film.

The rebels are much less pure and noble than the original trilogy. They fight amongst each other, issue assassination orders, execute injured informants, and some are depicted as straight up terrorists. They are on their last legs and most are ready to surrender. It takes the actions of the “Rogue One” team to unite them.

Character wise Jyn Erso, played by Felicity Jones, is the polar opposite of Rey from “The Force Awakens”, despite their superficial similarities. She can fight but she isn’t super powered and she isn’t enthusiastic. Instead she is tired and worn down without a cause to fight for. I really enjoyed Jones’s performance. I have seen it described as wooden in some places and I have no idea what those people are talking about. There is a wonderfully played scene where she watches a message from her father that is a masterclass in acting. I think it might be the best acted scene in any Star Wars movie. The one problem I have with her character is the arc seems too mechanical and her decisions forced on her by the screenwriters rather then feeling natural, but that is not Jones’s fault, unless she was an uncredited screenwriter. Jyn Erso is also the most tragic hero in all the Star Wars movies. By choosing to redeem and atone her father she pays with her life. Yeesh.

Diego Luna is solid as Cassian Endor, a rebel spy who is guilty of some bad deeds. The two temple guards, Chirrut Îmwe and Baze Malbus, are fun supporting characters who crop up in these types of movies. Despite being the most serious Star Wars movie there is plenty of humour, mostly from K-2SO, a droid played by Alan Tudyk. Imagine a sarcastic C-3PO who can fight. The weakest member of the Rogue One team is Bodhi Rock. While the performance is fine it feels like a huge chunk of his character motivations ended up on the cutting room floor. I also have to mention Forrest Whitaker, who gives a gonzo performance as a rebel terrorist. It’s one that you will either love or hate, no in between. I suspect the performance wouldn’t be as noticeable in a more traditional Star Wars movie.

As mentioned before the Imperial part of the plot is focused on bureaucratic infighting between Director Orson Krennic, played by Ben Mendelsohn, and Grand Moff Tarkin, played by a computer generated Peter Cushing. I would much rather have Tarkin played by an actor with similar features as Cushing, such as Charles Dance, but I did enjoy this plot. Krennic basically has his life’s work, the Death Star, stolen from him by his superior officer and the spends the rest of the movie trying to get it back, which ends with him getting a blast right in the face from the Death Star. Like I said before, a slight case of overkill. Oh yeah. Darth Vader shows up for a couple of scenes, and while awesome, is not an essential part of the movie.

So what did I find wrong about the movie despite all these elements I liked? I can feel the writers writing for lack of a better description. I can feel the setup and I can feel the resolution, especially when the Rogue One team attempts to open communications with the Rebel fleet in orbit during the climatic battle. It lacks the enthusiasm of the last year’s “The Force Awakens” though that is intentional. This is a more sombre movie. Jyn doesn’t feel as active as she should be during the climax, as she has given up her gun and is unarmed when confronted by Krennic, which leads to a cliched rescue. There are also moments during the climax that remind me of Space Balls and Galaxy Quest. On the other hand Jyn and Cassian’s final moments, while melodramatic and unoriginal, did make my eyes water a bit, thanks to some lovely cinematography and acting from Jones and Luna. The first 20 or so minutes are very hectic and all over the place, especially compared to the other Star Wars movies, but I suspect it will get better with repeated viewings.

So where do I rank this with the other Star Wars movies? Right in the middle. This is a 7/10 movie with some great ideas and not so great ideas. I like it better then the Prequel Trilogy and just as much if not more than Return of the Jedi, but not as much as Star Wars, The Empire Strikes Back, and The Force Awakens. What I admire most about this movie is it tried to do something different in the Star Wars sandbox, and judging by the box office the public are accepting the movie and it’s darker tone.