The sparrow, a tiny collection of feathers, skin, and bones, is a nasty, vicious species’ of Aves (is that scientifically correct terminology?), which rules the backyard birdfeeder with the ferocity of third world dictator fighting a populist uprising. Pouncing upon smaller birds, such as the gold or purple finch, or its brethren, a singular sparrow is not satisfied until it holds solitary possession of the food source. This leads to an endless, if not entertaining, cycle of violence, birds fighting each other instead of moving to empty perches where they can eat in peace.

I made these observations over the course of this rapidly retreating summer, while taking pictures of birds. My original plan was to capture images of birds in flight, which happens frequently around a feeder. I set my camera to the fastest exposure time and started taking pictures the moment birds came to eat. While I managed to snap a few decent images of flying birds the images that really struck a chord were of birds competing for food, especially the sparrows. I assembled the best images into animated gifs to showcase the sparrows behaviour.

What is this guy’s problem? Does it just assume the food on the other side of the feeder is better? Is it a bully? This sequence reminds me of a Bugs Bunny cartoon for some reason. I think its because the attacking bird momentarily hidden behind the feeder.

The aggressiveness on display in this image is at least understandable, as the food level is rather low. What this gif demonstrates is that many sparrows are mean, not just one outlier. They are quite happy beating up each other, and all claims to the throne (birdfeeder) are fleeting.

This is the silliest sequence by far and I was very lucky to get the kick at the exact moment of impact. It’s straight out of a cartoon. I can see the motion lines and a large graphic POW!! The other hilarious element is how full the feeder is: there are lots of empty spaces, but the sparrow would rather kick out another bird. Why? Sparrows are nasty creatures. 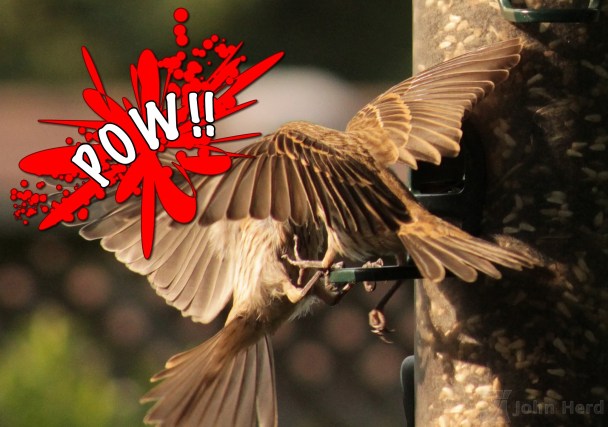 Some of the birds featured in here are finches. They are still vicious.