Here is a collection of animations featuring my alternate USS Enterprise. I’m pretty happy with the 3D mesh at this point and don’t see myself making any changes in the future. It was a fun exercise and I enjoyed experimenting with an iconic Sci-Fi design. If I have any regrets it’s that the ship is not as detailed as I would like, but since I don’t have a whole bank of computers and RAM at my disposal, this is the best the model will look if I want render times to remain reasonable. I’ve also fine tuned my rendering methods to make the mesh look as real as possible. Besides using the my global illumination method (shown here) I’ve also incorporated Cinema 4D’s Ambient Occlusion setting to add shadows and depth. Ambient Occlusion settings are close to their minimum to keep render times relatively quick (2-5 minutes per image). Below are some of my better renders: 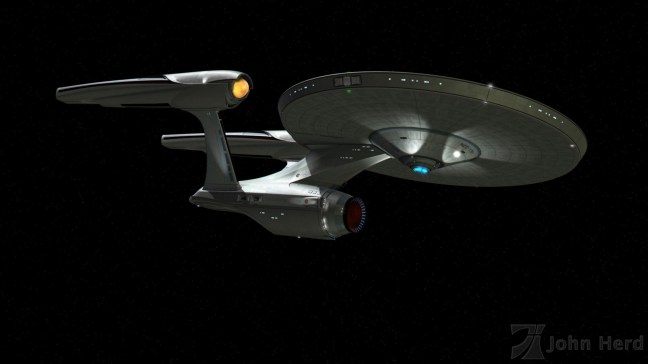 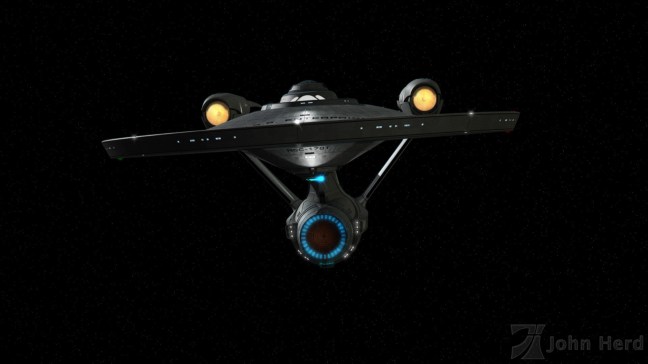 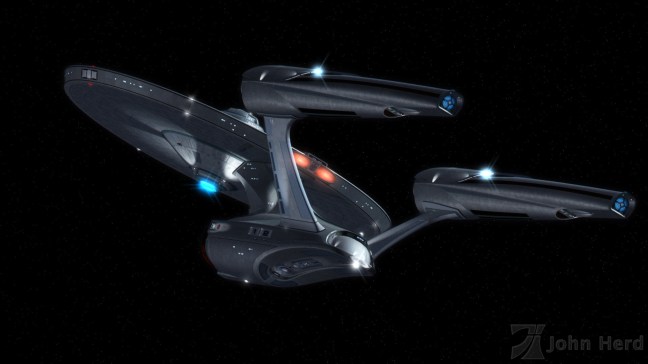 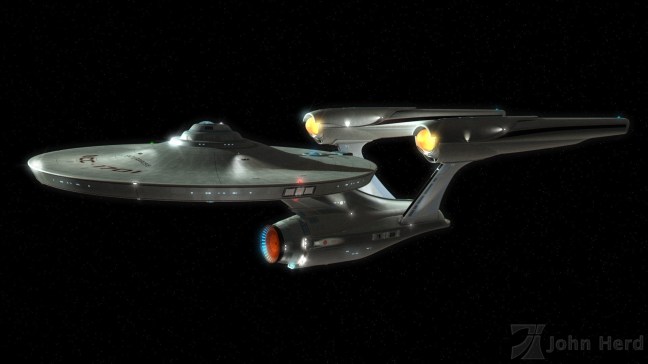 And what of Star Trek Into Darkness? The movie hadn’t been released when I made my last USS Enterprise post. On paper and thematically Into Darkness is far stronger then the 2009 film. Unfortunately on screen it was not. I felt the entire movie was on fast forward, allowing no time for the audience or the characters to breathe, leaving emotional and character beats by the wayside. The script feels like it was created by an algorithm created by a marketing research firm rather then human beings, focusing on delivering set piece after set piece, controlling the characters like game pieces on a board, rather then having the action sequences being an outgrowth of character decisions and motivations. I doesn’t help that every crisis the crew faces involves a countdown of some sort. Once is okay, three or four or however many it was is lazy. Spock’s Khan scream was hilarious, and ruined a nice, if very derivative, emotional moment between Kirk and Spock. Speaking of Kirk and Spock, the script of this movie and the 2009 one keeps telling the viewer these guys are destined for a great friendship, despite little onscreen evidence. I hate to say this but I think the writers are using people’s knowledge of old Kirk and Spock to say these guys are great pals, without doing any legwork themselves. I also thought Zoe Saldana as Uhura and Alice Eve as Carol Marcus were served poorly by the material they were given. That said there is material I appreciate in the movie. I liked the filmmakers addressing Kirk’s ridiculous promotion and ascendency from the first movie and suggesting he wasn’t ready for captaincy. I thought Chris Pine and Benedict Cumberbatch(sp?) had good chemistry and I feel it was a waste to make Khan the bad guy just so they could pay homage to Wrath of Khan. It’s a new timeline guys, do something different. On a similar note I thought Bones and Carol Marcus had better chemistry then Kirk and Marcus, so why not pair them together next movie instead of Kirk and Marcus. I always appreciate a good conspiracy thriller so I liked the idea of an irrational, immature Kirk being duped into starting a war by a secret cabal, though I thought the filmmakers should have done a better job showcasing Kirk’s internal struggle with his morally objectionable orders, rather then apparently changing his mind out of the blue. This is where my fast forward metaphor rears its head, as I feel the moment of Kirk’s change of heart, which should be the centrepiece of the movie,  was minimized in favour of the next action sequence. Kirk’s death scene, despite being unearned and plagiaristic, was well acted and emotionally involving until the previously mentioned yell. The opening segment was a lot of fun while also highlighting Kirk’s immaturity. Bruce Greenwood was once again solid as Pike, the only “good” character who projects gravitas and experience in the movie. As for Khan’s magic blood, Star Trek has had last minute saves like that since the 1960’s, so who really cares. What I’m trying to say there was good stuff in the movie, with themes far deeper then it’s 2009 predecessor, but they were not handled as well. So while Star Trek Into Darkness isn’t bad, it annoys me more then a truly bad movie because of the squandered potential. Anyways I’ve rambled on far to long, since this isn’t supposed to be a movie review. Overall it was a B-/C+ movie that had the potential to be an A. I know people and critics rated the movie highly when it came out but I suspect time will not be kind.