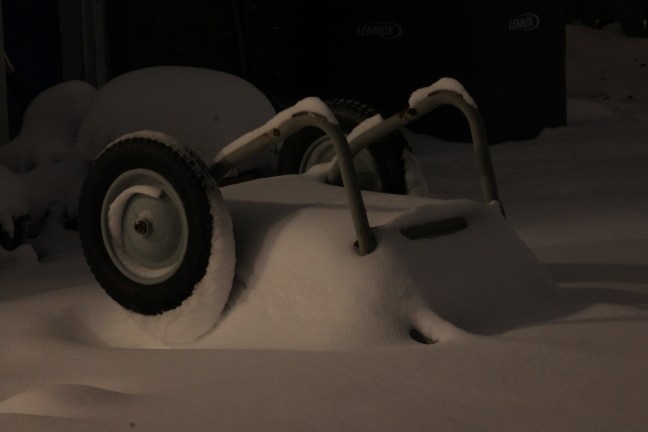 I am not a professional photographer. I have never worked in a studio with a proper light setup, I’ve never worked with models, I’ve never sold a photo, etc. I am a strict amateur who at best has taken some acceptable pictures of flowers and birds. Tonight I decided to add a new subject to my portfolio: a wheelbarrow.

Why a wheelbarrow? This afternoon there was a fresh snowfall which nicely covered the backyard, including the aforementioned. When I went outside with an insane cat who wanted enjoy the great, freezing, unbearable outdoors, I noticed that the snow-covered wheelbarrow was nicely illuminated by the outdoor and kitchen lights. I decided then and there I would take a picture of the scene.

Since it was dark out I knew the exposure setting would be lengthy and I would need a tripod to keep the camera (a mid-range Canon DSLR) steady. After some taking pictures at different settings I settled on an exposure of 3.2 seconds, F-stop at f/20, and an ISO of 1600. Here is the raw image of the wheelbarrow.

After the cat and I recovered from our brief excursion I took the image into Photoshop for post-processing. I ended up not making to many alterations to the final composition. The first step was sharpening the image. Next I desaturated the photo to make it black and white ( I did not use the Black and White adjustment layer if any reader was wondering). The red channel was copied to make a selection layer, which I used as a mask on a black layer and white layer to boost contrast and brightness. I find doing this step gives me more control then simply using the levels, curves, or brightness/contrast adjustment layers. The final step was tightening the image via cropping. Here is the final image of the wheelbarrow 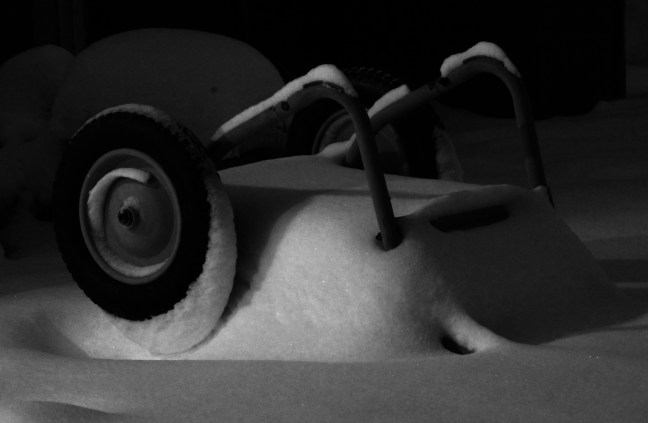 While I am relatively happy with the final image I may try taking it again provided the snow stays. I think the ISO I used was too high, and it has made the image too grainy. If I attempt the photo again I will set the have the ISO at 800 or 400 and extend the exposure time. Besides that I like the photo.