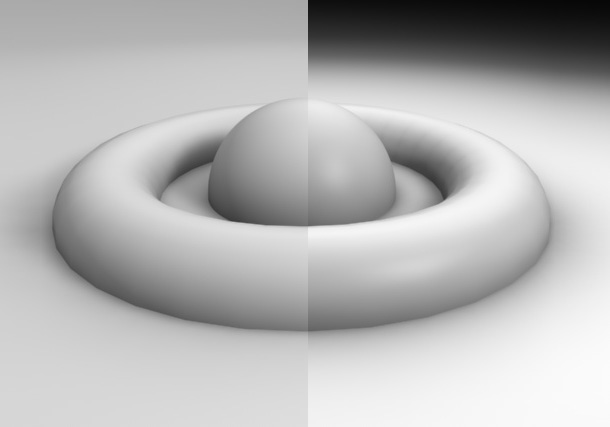 For the purposes of this tutorial all we need to know about Global Illumination is that it’s a lighting effect that makes your 3D models look great while massively increasing render times. This is fine when you’re rendering a single frame but aggravating when you need a lengthier animation. I am using an older version of Cinema 4D (version 11), in which animations that use global illumination have an annoying flicker effect, which compounds the issue. I believe the flickering effect has been fixed in newer versions of Cinema 4D but that is not applicable to my situation (3D software is very expensive except for Blender, which I am currently teaching myself).

How do I get global illumination style lighting without actually using global illumination? The search for the answer started with Cinema 4D’s lighting presets. One of the lighting setups is an Omni light placed into an array, which multiples the light 8 times in a circle around your scene. When I tried this setup I felt it did a decent quick and dirty approximation of global illumination, but I needed more light. I added to more arrays and placed them higher and lower to the first circle of lights with different intensity levels, creating something resembling a sphere of lights. The lighting looked much better but the render times were almost as long as renders using Global Illumination, so using Omni lights was clearly not the solution. Then it came to me: what if I used spotlights instead?

Spotlights render much quicker since they focus light in one specific area, whereas Omni lights scatter light photons in all directions. I replaced the Omni light setup with one using Spotlights. Much to my delight this worked fairly well and reduced render times considerably.

Here is a short video demonstrating how I set up a scene with spotlights. There is no audio but hopefully the video will be easy enough to follow without it.

*If this tutorial is similar to anyone else’s tutorial it’s completely coincidental and no plagiarism is intended.